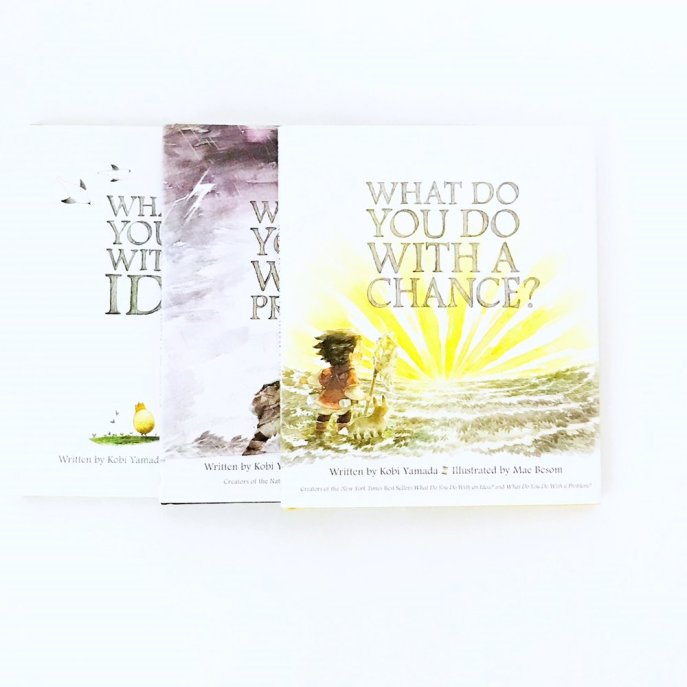 What Do You Do With An Idea: This is the story of one brilliant idea and the child who helps to bring it into the world. As the child’s confidence grows, so does the idea itself. And then, one day, something amazing happens. This is a story for anyone, at any age, who’s ever had an idea that seemed a little too big, too odd, too difficult. It’s a story to inspire you to welcome that idea, to give it some space to grow, and to see what happens next. Because your idea isn’t going anywhere. In fact, it’s just getting started.

What Do You Do With A Problem: From the same author and illustrator as the #1 nationally best-selling What Do You Do With an Idea? comes a new book to encourage you to look closely at problems and discover the possibilities they can hold. This is the story of a persistent problem and the child who isn’t so sure what to make of it. The longer the problem is avoided, the bigger it seems to get. But when the child finally musters up the courage to face it, the problem turns out to be something quite different than it appeared.

What Do You Do With A Chance: In this story, a child is visited by his first chance and unsure what to do with it, he lets it go. Later on, when a new chance arrives he reaches for it, but this time he misses and falls. Embarrassed and afraid, he begins ignoring each new chance that comes by, even though he still wants to take them. Then one day he realizes that he doesn’t need to be brave all the time, just at the right time, to find out what amazing things can happen when he takes a chance

What Do You Do With An Idea: The idea is illustrated as an egg. Eggs are viewed as fragile but also the beginning of life. You need to keep an egg warm and close to you for it to hatch into this new life. I thought it was the perfect representation of something intangible as an idea. This was the first book of Yamada’s that I read. I was attracted to the simple cover and ended up reading the whole book in a Target. Once I finished, I immediately bought it. I had to have my own copy because it was such an innovative idea (see what I did there? haha). I then proceeded to ordering all of Yamada’s other books as well.

What Do You Do With A Problem: The problem is illustrated as this dark ominous cloud in the sky that follows the little boy. Problems never disappear and will hover and cast a shadow over you for as long as it may. The ending illustration for this book was fantastic! The two-page spread was explosive and shows that though problems may look dark in the beginning, they can reveal great new opportunities.

What Do You Do With A Chance: The chance is illustrated as an origami butterfly. It’s small in the beginning, but bright and magical. Like a butterfly, chances will flutter around but eventually it flies away if you don’t take a hold of it. Third book by Yamada and I wasn’t disappointed.

Overall, I recommend all three books to read. If you have children or if you want to take a little breather from the more serious pieces of literature, these three books are a great choice.

Buy your copy on Amazon: