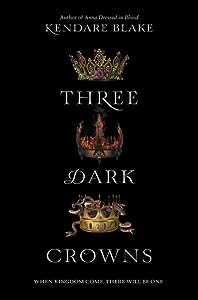 SUMMARY: When kingdom come, there will be one. In every generation on the island of Fennbirn, a set of triplets is born—three queens, all equal heirs to the crown and each possessor of a coveted magic. Mirabella is a fierce elemental, able to spark hungry flames or vicious storms at the snap of her fingers. Katharine is a poisoner, one who can ingest the deadliest poisons without so much as a stomachache. Arsinoe, a naturalist, is said to have the ability to bloom the reddest rose and control the fiercest of lions. But becoming the Queen Crowned isn’t solely a matter of royal birth. Each sister has to fight for it. And it’s not just a game of win or lose…it’s life or death. The night the sisters turn sixteen, the battle begins. The last queen standing gets the crown.

There are a lot of mixed reviews for this book. First off, it took me FOREVER to finish it. I ended up taking a LONGGGG break halfway through before buckling down and forcing myself to finish. I only gave this book a 3 out of 5 stars because of three reasons:

Overall, I only enjoyed around 20% of the book, which were the last 100 pages or so. The beginning dragged on and I’m guessing the author was taking her time to really get readers to buy into each of the queens’ characters/personalities, but at times I found it really long and uninteresting. There were parts in each queen’s story that I thought were repetitive and unnecessary. Also, for most of the book, I didn’t really enjoy any one character and couldn’t find myself attached to any. However, that could have been the author’s intentions to keep readers from cheering on any one of the queens throughout the book.

Character Development: There really wasn’t any present throughout the book, but from the few reviews I read about the second installment, it seems most of the growth will happen in the next book. I’ll talk about a few of my favorite to least favorite characters.

Arsinoe: The Naturalist queen. Her personality was the most dynamic and interesting. I found her refreshing and honest. She accepted the fact that she was “giftless” yet she was doing everything she could to make some sort of gift arise from inside her. Her efforts were admirable despite the fact her methods may not have been. I enjoyed reading her chapters as I found myself curious as to what she would do next. Her relationship with Jules and Camden were heartwarming. I love them both.

Jules & Camden: Jules is one of my most favorite characters. She’s true to herself and Arsinoe. Her loyalty and honest to goodness towards her friends is to die for her. She never waivers and her strong personality always shines in whatever she does. I’m sure the next book has a lot in store for her.

Mirabella: The Elemental queen. Known to be the strongest with the backing of the High Priestess, she’s destined to be the reigning queen. However, her powerful exterior conflicts with her delicate heart. Though she was the strongest of her sisters, she was the most empathetic and hesitant. She was misunderstood because of the image the priestesses painted of her. She was frustrating to read about at times, because if she took a little bit more of an initiative a lot of the problems would have been solved. I hate when miscommunication is a factor of a problem remaining unsolved.

Katherine: The Poison queen. She’s my least favorite. Her character is just unlikable in my opinion. If I were to guess, I would say she is only going to get worse in the next book. I didn’t like her in the first and I’m pretty sure I’ll dislike her even more in the next book if she stays on the same path.

Joseph: I hate this guy. I’m not going to spoil the book, but in the beginning I really enjoyed reading about him with Jules. But by the end of the book I wanted to strangle him. He’s so worthless and his words never support his actions. Weak-minded guys are the worst.

Overall, I would recommend this book if you’ve got nothing on your list to read. It’s not an immediate go out and buy type of book, but maybe more of a library check out kind. The cover is beautiful though. It was well written and though some people might find the shifting perspectives jarring, I thought it was organized enough to follow without getting confused. Just be prepared to have to trudge through at least 75-80% of the book before you can really get into it. The ending was very interesting and I didn’t see the twist at the end–the cliffhanger at the end itself makes me want to read the second just to see what happens. Though I have no strong attachments to any of the characters to see how things turn out for them.

Buy it on AMAZON.